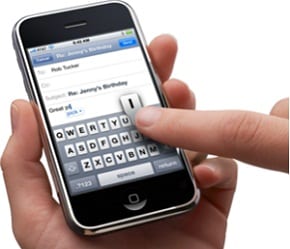 There can be no doubt that the world is in for some turbulent times. The United States elected a new president on November 8th and people are either rejoicing that Donald Trump won, or they’re feeling frightened for their very lives. Despite what you may personally be feeling, everybody can agree on the fact that love is the most important thing people can share during times like these. There are 4 long years ahead of us, and it is what it is.

You may hate Trump, and you may like him, but whatever your feelings, your actions are extremely powerful, especially during this time. Your words will either cause division, or they’ll help people, so be wise, and think twice before you speak out. If you’re looking for ways to help the cause instead of hurt people around you, here are 3 ways you can use your mobile phone to love others during Trump’s presidency:

It’s like a telegram, but you use your voice instead. Cell phones are such a huge commodity. Times like these can leave people feeling divided, but your phone gives you the opportunity to close the gap somebody might be feeling. Call people and leave them voicegrams, or voicemails that tell them how much you love and value and support them. People need to hear words of affirmation spoken over them and just because you can’t see them in person doesn’t mean you can’t do just as much good with a loving phone call and message.

Write Material That is Life Giving

During circumstances like these, it’s easy to fight fire with fire and combat hate with more hateful jargon that belittles people and makes them stare at the horrendous atrocity of their own lifestyles and beliefs, but if you spend all your time talking about how hateful the other party is, yet you rebuttal with the same stain of hatred, you’re no better than them. For this reason, use your phone to write material that is life-giving. Starting a blog is fast and you could write about happy things that positively affect the world. Be a voice of hope.

Send Somebody A Gift

Instead of spending all your time getting angry over facebook posts for the next 4 years, consider shutting off the social media altogether and instead spending your time scrolling through commerce sites looking for gifts to bestow upon people. Giving is better than receiving, and you never know when that gift you gave could end up saving somebody’s life.

Dark days are ahead, but the light of the screens on your mobile device can help if used in the right way. Use your phones in the right way in this season. Don’t troll. Love like it’s the end of the world.

What To Look for in a Washer and Dryer