You might be interested in
Demand prediction and how is it different from...
Small Business Tech Trends of 2022
5 Ways AI is Changing the World
Essential Components of a Gaming Computer
Reasons To Study Data Science
Marketing for a Good Cause: 4 Marketing Tips...
How to Choose a Health App: Tips for...
4 Solutions for Low Productivity in your Business
How Gigification Is Transforming Modern Workplaces
Things to Consider Before Applying for a Lån...
Home Android Full Review of Samsung Galaxy Core 2 Duos
Android

The  Samsung Galaxy Core 2 Duos was launched last year in the month of July and featured with 4.5 inches TFT touchscreen powered by 1.2 GHz quad-core processor and a 5MP rear camera. The phone is one of the cheapest smartphones that Samsung has ever made with a Quad core processor. The launch of this device was mainly focused on attracting customers that wanted to own a smartphone with great specs at an affordable price. The phone being dual SIM accepts Micro SIM cards. 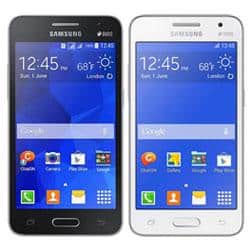 The phone looks very similar like the series of other smartphones released by Samsung; it’s made of plastic and shares the design blueprint just like other Samsung smartphones. The smartphone has a good build quality and has been given a smooth finish. The back cover is removable thus giving you the access to the replaceable battery, two micro SIM card slots, and a Micro SD card slot. The layout of buttons is same as that of standard Samsung phones, with a tangible home button at the rear side of the front screen while two soft buttons are present on the other side of the home button. The volume rocker button is provided to the left while the power button is on the right side of the phone. MicroUSB slot is provided at the bottom while the earphone jack is provided at the top of the phone.

The phone is very handy as its dimensions are 5.13 x 2.68 x 0.39 inches and so you can use it with one hand only. The phone is light weight, with its weight as 138 g (4.87 Oz), thus you can use it for a long duration of time. There are two color variants available of the phone which includes, Black and White.

The phone is provided with a 4.5 inches TFT capacities touchscreen with 256K colors and a screen resolution of 480 x 800 pixels. The phone is multi-touch enabled and has approximately 207 ppi thus giving it a decent display at such a price point. The screen’s display lacks a little sharpness and you would observe that the screen is not as bright when you use the phone. There are no problems associated with viewing angles and color reproduction of the phone. The display is protected with an oleophobic coating that seems to attract a lot of finger marks and smudges. The lack of an ambient light sensor in the phone makes it difficult to use in bright sunlight and to cope up with this problem Samsung has provided a brightness slider, using which users can increase the brightness of the screen manually.

The Samsung Galaxy Core 2 Duos is provided with 4 GB of internal memory which can be expanded up to 64 GB using the Micro SD card slot. The phone comes with 768 MB of RAM.

The phone is powered by 1.2 GHz Quad-core processor, which works decent enough to make the phone free from lag. You will not find any performance issues till the phone’s internal memory is less cluttered and as soon as heavy games and videos are installed in the phone, then its performance takes a nose dive. Though, games like temple run are played effortlessly on the device.

The phone is provided with a 5 MP Primary camera that can capture images having 2592 х 1944 pixels. The primary camera comes with auto focus and LED flashlight. The front camera is of VGA type and is of 0.3 MP. Video recording is done at [email protected] quality. The front camera also features the functions like Geo-tagging, touch focus, face and smile detection. The phone captures decent images in broad daylight, but you can’t expect great details and color with it. The camera doesn’t work that great in dim lights as the images tend to fade out. The front camera is just for the namesake as the quality is really despicable. The video recording is of average quality with a little problem of background noise.

The phone is powered by a 2,000 mAh replaceable battery that promises up to 7 hours of talk time and up to 30 hours of music playback. The battery seems to underperform a little as the quad-core processor seems to drain it very fast, so you need to charge it within a few hours if moderate to heavy usage is done on it.

The phone runs on Android Operating System version 4.4.4 KitKat using the Samsung’s TouchWiz Essence. The colors used in the UI appear really bold. This phone runs on KitKat very smoothly, while the dates for lollipop update has not yet been finalized by Samsung, we really advise you to be very thoughtful before trying to update this phone as we all know what happens to Samsung phones after updates.

The Samsung Galaxy Core 2 Duos is the best smartphone in the market for people searching for great specs at an affordable price point. Though the phone is comparable with Micromax Canvas Juice 2, but the user experience is not good compared to the review of Samsung Galaxy Core 2 duos. The phone features a powerful quad-core processor, compact display, decent camera specs, and a replaceable battery, thus making it an amazing smartphone while the price in India of this smartphone has gone under 7 thousand, one should not wait anymore to buy this set. The phone has received a featured score of 60 on Pricejugaad.com giving it an average outlook while the others have given it a review score of 59 which is less than average outlook. No change in price is suggested by the Pricejugaad in a future month, so if you are planning to buy this phone, now is the best time.

Don’t Waste Time! 5 Reasons why You should switch to Speaking Pictures Today

Smartphones Vs. Tablets – Which Ones are Best...

4 Types Of Tech Every Startup Needs Including...

How to Recover deleted Images in Android

5 Advantages You Have With Android Over IOS